Trump as a catalyst

The new US president rocks the boat and contributes to market volatility creating, thus, investment opportunities. The boom on the stock market might persist in the long run. 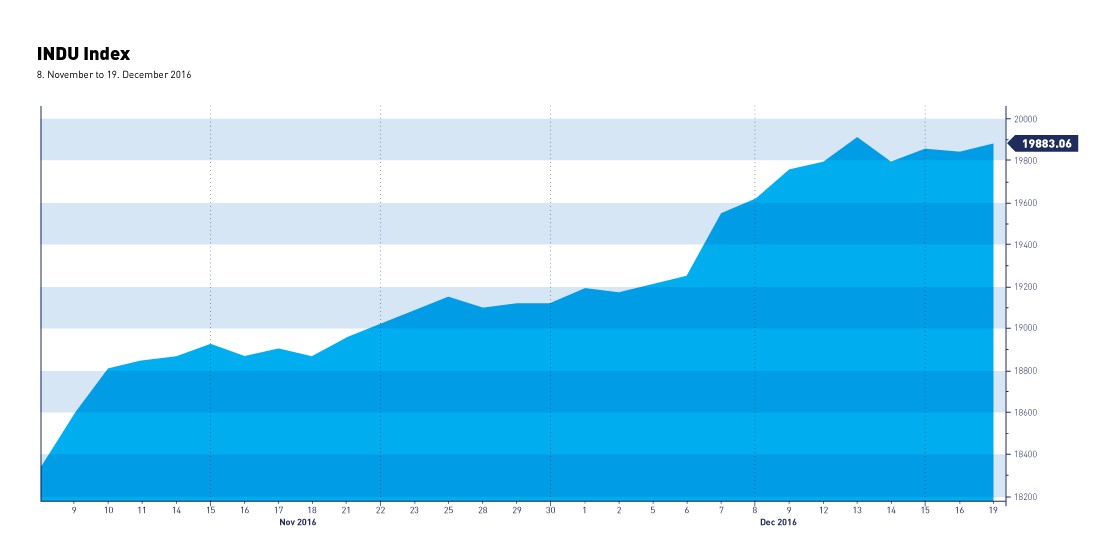 Enjoy it while it lasts!

Looking at the performance of the US indices year to date, and especially at the sharp gains we have seen since the election of Donald Trump, one has to question, how sustainable and durable those gains actually are. Whilst we see no immediate concerns into year end and perhaps into the middle of January, the current valuations of US equities at a price-earnings ratio close to 19 times leaves little room for error.

We of course recognise that US markets have priced in a certain amount of fiscal stimulus in terms of tax cuts and infrastructure spending, which if implemented, would make valuations more reasonable or in some cases cheap.

However, before this happens it is perhaps…

Time to pay the piper

Looking forward to late January (Trump`s inauguration on the 20th) and early February, a pullback in US equities seems likely, especially as markets start to focus on reality while the pre- inauguration honeymoon comes to an end. One statement can be made for certain, Trump is a disruptor, and we could easily imagine something similar to the “taper tantrum” – let`s call it the “Trump tantrum” – where, if he does not get his own way on corporate tax cuts, he threatens to resign.

We have already seen comments from the Senate that any fiscal stimulus needs to be budget deficit neutral. How that is going to work, is a big question. Also, we know that many in the Republican Party are not Trump’s biggest fans. This leaves room for volatility!

Another area of concern could be negative corporate profit outlooks coming from the US companies which may have been affected by the rampant strength of the US Dollar. A further sell off in the USD bond markets could also be a trigger point.

We would view this pullback as a buying opportunity, but you will need to be nimble and have liquidity as our outlook for 2017 as a whole remains positive, since we expect a good part of the proposed US fiscal stimulus to go through, corporate profits to increase, and more investors to get involved with equity markets.

Europe could turn out to be a safe haven!

The declining Euro and higher leverage on corporate balance sheets could provide a very strong tail wind should corporate profits increase substantially. Lower valuations could also attract international and US investors who worry about elevated prices of the US equities.

You could make some good gains from US bonds

Whilst we believe that we have now entered a bear market for US bonds, it is worthwhile to remember, that even in bear markets there are rallies and in fixed income securities these tend to be vicious. While we concur that there may be at most three rate hikes in the US next year, we remain unconvinced that another three rate hike in 2018 should follow. It is entirely possible that the US 10-year bond yield could spike to 3 percent or higher, but this could well be only a short term trading opportunity as inflation expectations moderate.

The rest of the world joins the party

The US fiscal experiment seems to work resulting in a much faster US GDP growth, severely increasing pressure on other countries to follow the formula of fiscal stimulus via tax cuts and possible state infrastructure expenditures. Even the Germans are bullied (admittedly kicking and screaming) into the experiment as their electorates put them under severe pressure.

The prospect of a return to the 1980`s mode of fiscal stimulus policy and the equity bull market, which started in 2009 or 2011 (depending on how one measures it), could turn out to be one of the longest in history running for another seven to ten years.