this is the else
Wealth Management: European Interest rates: on hold till Summer 2019 – swisspartners – The art of finance

Draghi makes sure the doves are flying… 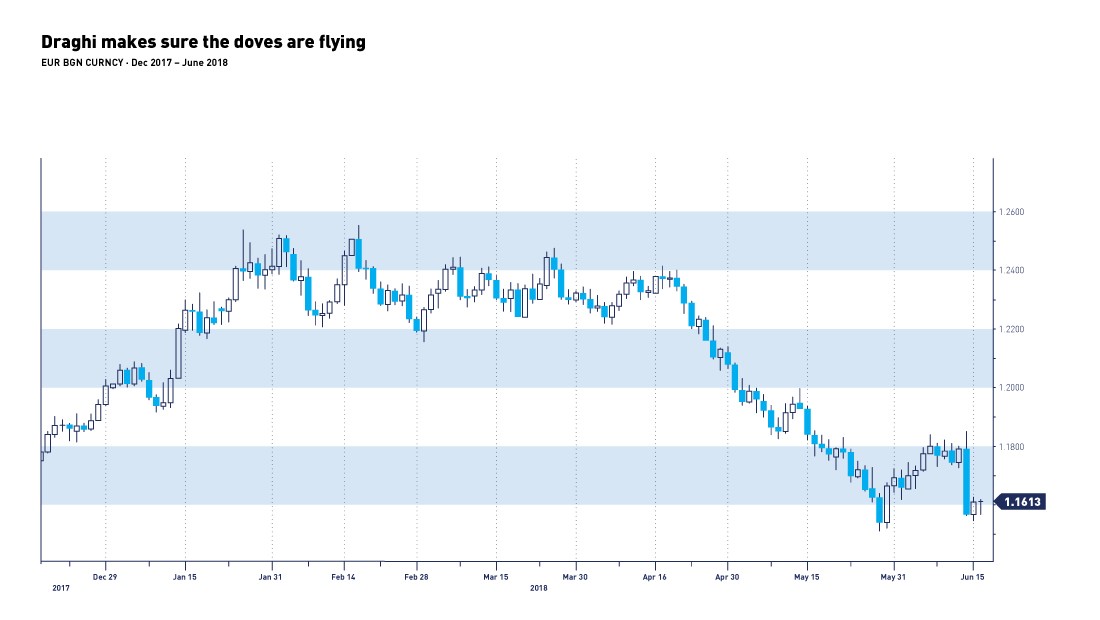 There are very few Central Bank figures who can hold the respect of the financial market for long periods of time. However, one exception is Mr Draghi at the ECB.  Ever since Draghi warned in 2012 that the ECB would “do what it takes” to stop the Euro imploding he has been lauded with not only saving the European currency but also ensuring that financial institutions had sufficient access to capital to stop Bank runs within periphery nations. At the time, this dovish talk and Q/E measures caused the Euro to fall sharply in value over the ensuing 12 – 18 months and gave European Exporters, Stock Markets and Banks a huge ‘shot in the arm’.

Fast forward almost 6 years and Europe an investors were worried that the ECB’s bond buying program, widely credited for keeping interest rates at historic lows, was coming to an end. And the market was completely right; the ECB duly announced in June that it would stop its Q/E program by the end of the 2018.

However, what the market had not expected was that Draghi would then give a clear indication that ECB rates are on hold till the Summer of 2019. Many in the market have taken this statement to mean that there will be no rates rise till at least September of next year and it has been viewed positively by most investors.

The move by the ECB will of course allow Companies and Consumers time to adjust and prepare for the eventual series of likely small rate rises. In addition, in October of next year Mr. Draghi will pass on the reins of power at the ECB to a new incumbent and many have suggested that a small rate rise may be his ‘parting gift’. This seems plausible as it would demonstrate that European financial markets were returning to normal. However, of greater significance to investors is whether Draghi’s successor may adopt a much more hawkish tone on rates and policies.

The latest Eurozone Retail PMI figures (Purchasing Managers Index) show an increase above the key 50 level and it seems likely that Draghi’s latest comments on rates will keep the Euro down and the cash- tills ringing.

It is worth noting across Europe the positive impact of a weak Euro and higher spending on luxury items from Asian, particularly Chinese tourists, in the major hotspots of France and Switzerland. 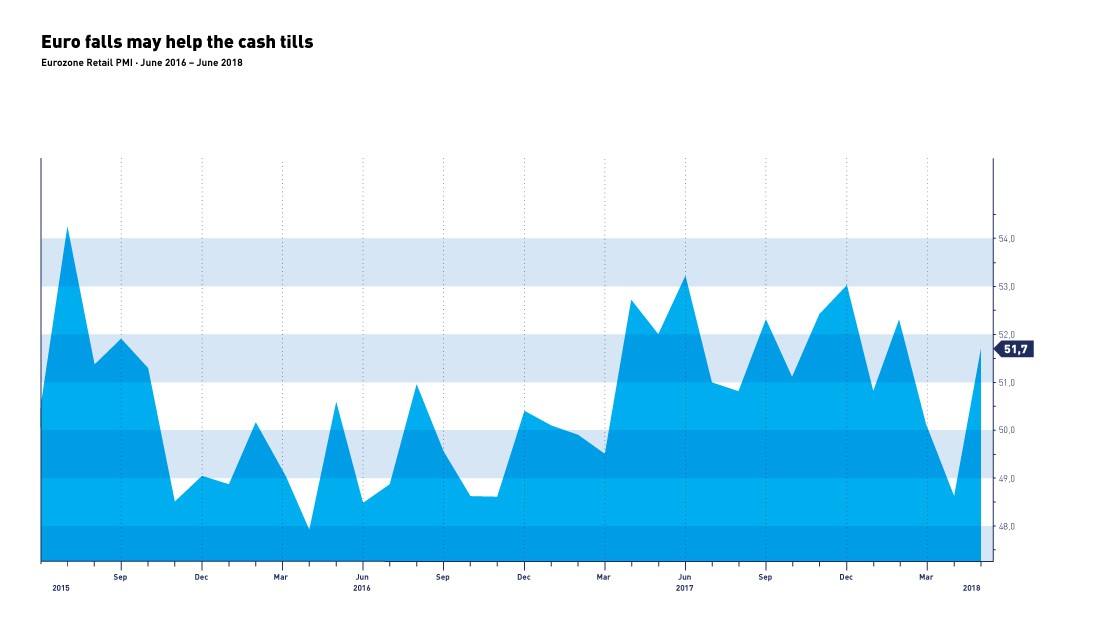 Eurozone Inflation on an improving trend

There are of course more than a few positive signs of life in Europe, not least the pick-up in inflation, which serves as a welcome relief to any debt laden consumer. However, the list of worries within Europe is of course fairly long and was not helped by the recent success of populist parties in Italy and moves to increase voter’s wallets through higher government spending and debt. Mixing these populist moves with a continuing trend of dis-satisfaction over high youth unemployment across several European countries does make for a febrile state of mind at most polling stations.

Italy does of course pose an existential threat to the Euro if its voters decided to leave the club, however, at the moment more pragmatic voices in Rome are to the fore amid calls for Europe to reform its structure and priorities from within rather than abandon the project.  What might this look like across Europe?  We suspect a mixture of supply side reforms coupled with further calls for a slight loosening of fiscal strait –jackets to help voters.

In terms of Emerging Markets Debt (EMD), despite the higher yields on offer compared with Europe and US bonds we prefer to be on the sideline. A potential higher USD together with higher yields could be challenging in the first wave of volatility for EMD and bond markets as a whole.

Of course one has to distinguish between short and long maturity as well as local and hard currency, but in general the absolute level of global since the Great Financial Crisis in 2007/8 has surged to a new high. Against such a difficult back-drop for bond investors, we would prefer to be careful about where we invest at the moment and this approach is likely to continue for the remainder of 2018 and beyond.

At the moment, we believe that Institutional investors have created a crowded playing field in EMD and this factor alone could depress prices as this category of investor tend to head for the exit door together –especially if past cycles are any guide.

Regarding Emerging Market Equity, the good news is that we are more optimistic.  We would suggest that investors should seek to distinguish between countries with the heathy balance sheets and believe that the debt level within companies should not be too high. In addition, we think that it makes sense to pay attention to the major trends such as recent developments within old and new economies as well as demographic changes which affect affluence and healthcare spending. Where we invest capital with Emerging Market Equity managers we favour those with many years of experience and have a bias towards Investment houses which are prepared to invest in high conviction portfolios.